It’s the podcast for fans of films, crazy filmmakers, funny comedians and typos. This podcast has comedian and writers recapping their favorite good/bad and cult film.

Plus –  Interviews with the people who make them.

“Proudly Resents” also had the exclusive interview with the man who claims he secretly directed the worst movie of all time, “The Room.” 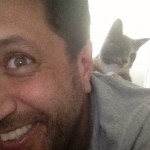 Adam Spiegelman (Host/Producer) – Adam’s love for cult and good bad movies goes back to childhood when he heard that people would go to Rocky Horror Picture Show just to make fun of it. At 13, Adam lived his dream by going to a midnight screening of Rocky Horror. It was in New Jersey so instead of a floor show, there was one guy yelling stuff. Still he was hooked.

See some of his interviews and comedy here.

When he’s not working or doing the podcast, Adam likes to spend time with his wife, Melissa, daughter, Rose and two cats, Liz Taylor and The Inspector (pictured). He also enjoys writing bios about himself in the third person.

The logo was designed by Dave Shoenholtz.

Send us your movie suggestions.