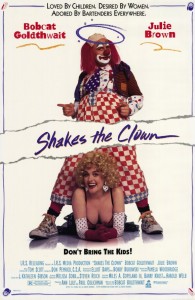 (part 1)Bobcat Goldthwait’s latest “God Bless America” is only his fourth film as writer and director and in one of the most unusual film careers imaginable. Bobcat talks about how he cast and made “Shakes the Clown” and what major director gave it a shout out. We also address the time he was dead, why he made the “Police Academy” and talking horse movies, “Keith and the Girl,” Tom Cruise, getting into Sundance and his other great films, “Wold’s Greatest Dad,” “Sleeping Dogs Lie,” and of the great “Windy City Heat.”

BUY ANY OF HIS FILMS BY CLICKING ON THE TITLE. (The show will get a piece of the action!)

Bobcat is a great guy and a good friend. He came in and opened up and was completely honest about his films, fans and life. Actually he was so open that I’ve split this up into to parts. Next Wednesday I’ll put up part 2.

Subscribe on Itunes or Stitcher to get it right when it comes out.

If you want the episode right away, sign up for our email list and I’ll send it to you. I’m not a big email sender. So don’t worry about spam. You’ll get bonus content, news and occasional cat video.

You’re my best…no you’re not.

Todd Yasui: Behind the scenes of late night TV

https://media.blubrry.com/proudlyresents/p/proudlyresents.com/media/prp169a.mp3Podcast: Download | EmbedSubscribe: Android | Google Podcasts | RSSBig time TV producer, Todd Yasui is the guest today. Todd was the Executive Producer of “Late Late Show” with Kilborne and Ferguson. He was also my boss on “The Queen Latifah Show.” It’s amazing to learn that he got his first job by cold calling […]

https://media.blubrry.com/proudlyresents/p/proudlyresents.com/media/prp112.mp3Podcast: Download | EmbedSubscribe: Android | Google Podcasts | RSS“Open Water” actress Blanchard Ryan talks about what it was like to swim with actual hungry sharks for a movie about swimming with hungry sharks. No CGI here. Just two actors, bloody chum and scary sharks. The tiny non-union movie became a huge hit at Sundance […]

Richard Pryor on a 1977 talk show talking about all the women (and boys) Gene Wilder gets and Pryor’s true feelings about Steve Martin. Very cool Stuff. I don’t know who the interviewer is. Listen to “Proudly Resents” – the cult movie podcast. Interview with Bobcat Goldthwait.