With “Parenthood” ending it’s 5 year run, here’s a look at other movies that have become Sitcoms… Twice.

This isn’t the first time a movie has been spun off into a TV show more than once. Here are six movies that were TV shows twice.

Before NBC made a drama out of “Parenthood,” NBC made a sitcom out of the movie. The Steve Martin movie felt a lot like a sitcom, so it was no surprise when the Ron Howard movie became one in 1990. The “Parenthood” sitcom only lasted for  12 episodes and had Ed Begley, Jr. in the Martin role. It also starred then unknown  actors in comedy David Arquette and Leonardo DiCaprio. It also featured still unknown actors Jayne Atkinson and Ivyann Schwan. 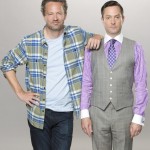 Did you assume the Perry “Odd Couple” is the only time they remade the classic 70’s sitcom? Well, if we learned one thing from the original show, you never assume. (You make an “ass” out of “u” and “me.”)

In 1988 ABC tried to revive the show with a black cast. Ron Glass from “Barney Miller” played Felix and the “Son” from “Sanford and Son,” Demond Wilson, played Oscar. Eight of the eighteen episodes that aired were rehashes of the original TV show, including the famous courtroom scene.