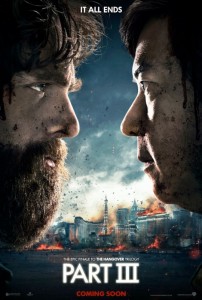 From Bostinno.com
Hangover fans may not have loved the second installment in the trilogy, but on May 24, 2013 the Wolfpack is back in action. An official poster was released yesterday on The Hangover 3’s Facebook page with Alan and Chow facing off. What more crazy shenanigans can these guys get into? From a missing tooth, a tiger, a marriage to a stripper and a friendship with Mike Tyson, the guys seem to have done it all.

What fans can expect this time around: Hangover 3 will NOT have the same template as the previous two movies as stated by director Tod Phillips. In other words, the boys won’t wake up drunk and try to piece their night back together. While funny the first time, it wasn’t entirely a hit the second time. In an interview with Rolling Stone Magazine, Zach Galifianakis said his character escapes from a mental institution with the help of the Wolfpack. The Wolfpack’s adventure takes them to Los Angeles, Tijuana and eventually Vegas after “something from the first movie comes back to haunt them,” according to Entertainment Weekly‘s report.
—

The Hangover 3 poster parodies the Harry Potter and the Deathly Hallows part 2 poster with Potter and Voldemort facing off covered in muck and grime. Harry Potter is still an incredibly lucrative franchise as the six films have grossed $1.7 billion in total and fans continue to visit Universal Studio’s The Wizarding World of Harry Potter.