Heather Graham is super hot and a good actress, but she fell into a string a of bad films for a long time. “Baby on Board” was one of them. She plays a career woman who has it all. A husband (Jerry O’Connell), a gay assistant, a bitchy boss, an understanding sister who has the family that Heather dreams of. Oh, the sister is married to Jon Corbett from “S#x and the City.” (Or is it “in?”)

Corbett is totally miscast as Jerry’s wacky, drug taking, wife cheating, fast talking best friend. Basically the John Candy character from “Splash” that seems to be in every kooky comedy. You know the guy who is happy being the devil and acts as both a bad influence and a cautionary tale for the main character.

Anyhoo, Corbett talks Jerry into taking a number from a hot Asian chick at the gym. It’s for a message, but she kissed the back of her business card. (The director made a point in the commentary that he was having trouble finding an Asian woman for that role. Does it have to have to be an Asian? Only Asians giveback rubs? You can’t have a black masseuse?) But let’s get back to the card. Who kisses the back of a business card unless they want to make it sexual. You do see your plumber kiss his card. If he does, go for it, take the plunge. (Sorry)

Heather finds the kissed business card and thinks he’s cheating. Heather doesn’t confront him. She just gets upset. Then tries to get him jealous. Now he thinks she’s cheating. All they have to do is talk to each other. 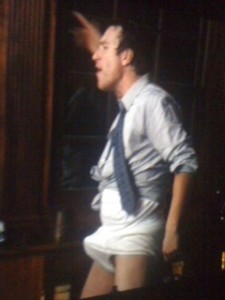 Oh, Heather sees Jerry making out with a woman at dinner. It turns out it was one of Jerry’s grateful client. Well, that kinda was cheating. Yikes. The kiss had to be long enough for Heather to see it. So it might be a gray area. I’m not a lawyer, but you might want to put one on speed dial.  The director is trying to set up a misunderstanding. Instead, he set up an understanding.

When Heather does accuse Jerry of cheating; Jerry just ignores the charges. No better way to say, “It was a misunderstanding,” than by saying nothing and looking super guilty. Heather goes to her mom to find out how to handle the situation. Her mom’s advice; ignore Jerry. Why not, Mom? It worked so well for Jerry. Corbett tells Jerry to do the same and ignore Heather. So Heather and Jerry act like children and don’t talk to each other  the whole movie. Oh, Heather’s pregnant the whole time.  I forgot to tell you that. Jerry ignores his pregnant wife instead of just telling her that his masseuse and client don’t get sexual boundaries.

Not a good bad movie. Not fun to watch. Watching the director’s commentary is fun. That’s all. No reason to get nasty. Just not good.

Oh, for some reason the guy who does the Applebee’s voice overs shows us his boner. Something good in the neighborhood, indeed! I’ll have what she’s having!