Welcome to Proudly Resents. The obsessive podcast about cult movies. Today it’s all about “The Room.” I’m talking with the man who played drug dealer with a black beanie and absolutely no patients, Chris-R. I’ve been obsessed with the movie the room since I saw it at a midnight screening in 2004. So it’s so exciting to see it go mainstream. I still think it’s cool. Tommy impressions have replaced Borat impressions with the office goofball.

I’ve been lucky enough to record interviews with Tommy Wiseau, Denny Aka Phill 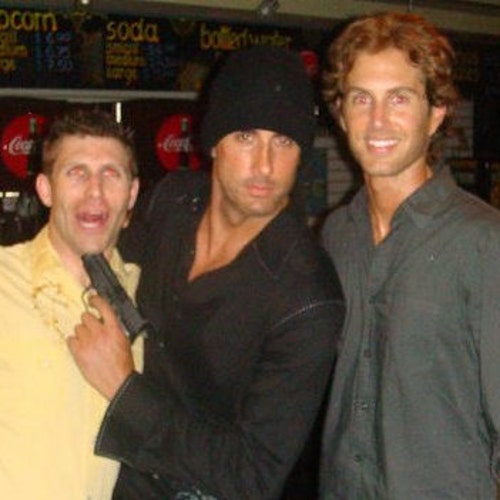 Robin was the one who put me in touch with today’s guest Chris-R himself,

Dan Janjigian. Dan is not just Chris-R, but you’ll hear about his Olympic career

and his wife’s unusual profession. Got to Proudlyresents.com/Chris-r to find links to his site and Facebook pages. Also, you’ll find interviews with other Room actors include Tommy Wiseau, Phillip Halderman who played Denny and Robin Paris who was Lisa’s frisky best friend. Plus a controversial interview with the man who claims he was real director of the movie.

You can also find past episodes, make a donation, contact me or but a very cool well-made t-shirt from Busted Tees. We get a piece of the action. If you haven’t worn a shirt before, wow, trust me, a game changer. And you can get into better restaurants.

Thanks to dan for that great interview. Go to Proudlyresents.com/chrisr to find links to things he was talking about. Plus you can watch”The Room Actors: Where Are They Now? A Mockumentary.”  find past interviews and reviews, leave a donation or buy a shirt.  Have you thought more about this wearing a shirt thing? It’s highly recommended. And if you must wear a shirt, why not wear a cool with your favorite movie on it. The room, Star Wars, Stranger Things… Oh yeah, that cool. There’s a banner ad on the website or got to pr.shirts.

I’ve done over 200 episodes so I spit it up on Apple podcasts into different categories. There’s Proudly Resents Bad movie recaps where hilarious comedian talks about terrible movies, PR Interviews – with people like Bobcat Goldthwait and Lloyd Kaufman. And Pr The Room – with interviews with actors and behind the scenes actors from the movie.

Thanks to Robin Paris for putting this together. You can watch”The Room Actors: Where Are They Now? A Mockumentary.”  on YouTube. Support Robyn’s show by joining her Patreon page.

More “The Room” interviews below:

She played Lisa’s mom. The results are in!

Tommy sued Rick Harper for making a tell all doc about The Room. “Room Full of Spoons” director tells all

The man who writes “The Room” fan fiction & his version of the prequel.