Here’s the plot description from Wikipedia:

Ben (Jamie Brett Gabel) and Arthur (Sam Mraovich) are a homosexual couple eagerly awaiting the legalization of gay marriage in Hawaii so that they may travel there for their dream wedding. After a news bulletin that a judge has made a ruling that will allow gay weddings to take place, the men purchase plane tickets and prepare to depart; however, before they leave, they discover that a challenge to the judge’s ruling has resulted in a suspension of gay marriage in Hawaii, pending further judicial review. Ben takes advantage of the delay to inform Arthur that he is actually already married to a woman named Tammy (Julie Belknap), whom he wed out of societal pressure before he came to terms with his homosexuality and from whom he has been separated since before he and Arthur met. Arthur becomes angry, but decides to stay with Ben anyway. Shortly thereafter, Ben contacts Tammy, finally comes out to her, and asks her for a divorce. 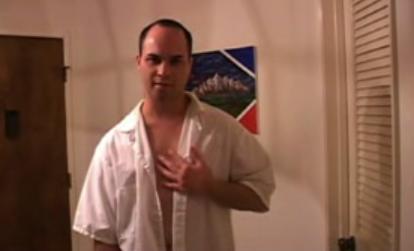 After the disappointment of their near-wedding, Ben and Arthur resume their daily life, working in a small diner in Los Angeles, where Ben is a dishwasher and Arthur is a waiter. Although Ben—a former nurse who quit to pursue a music career—enjoys the manual labor and hours, Arthur has grown impatient with servitude and putting up with needy customers. One night, Arthur decides to quit and go back to college, so that he can earn an MBA and open up his own sex shop. Although the loss of income to the household means that Ben will have to quit and return to being a nurse, he agrees to do so in order to help Arthur pursue his dream.