Seymour Cassel took the check for this “Film.”

With the movie “Freerunner,” writer/director Jeremy Sklar found himself on the business end of the dark edge of showbiz. He calls it the “Auxiliary Movie Business.”

As an intern in a movie house, Jeremy quickly rose from reader to screenwriter, director, editor, and publicity. The whole way being fired numerous times. Jeremy tells his side of the story. If you have your own version, we want to hear it. (Jeremy’s views are not the views of this podcast.) 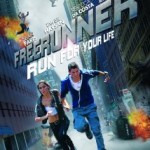 There’s another world of movies outside the conventional studio system. It’s salesmen parting rich people with their money. Falling stars going for a quick cash grab. And foreign sales of American films that might never be seen in this country.

Plot from IMBD
With a ticking bomb locked to his neck, a young freerunner races against the clock and all types of baddies to get from one end of the city to the other to save himself and his girlfriend played by Rebecca Da Costa.