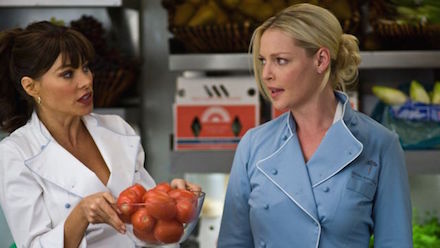 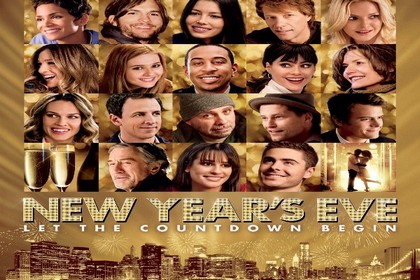 New Year’s Eve ft. Robert De Niro, Halle Berry, Ashton Kutcher and other huge stars, that owed the late great director Garry Marshal a favor, make extended cameos in this big screen “Love Boat.” Mike Spiegelman (my big bro) and I take down “New Year’s Eve,” the semi-sequel to “Valentine’s Day” (or pre-quel if you go by the calendar).

As usual, I mangle words and names. Tweet us the mangled english you caught from Mike and I. @proudlyresents @spiegelmania.

When Seth and Hailey are at the Restaurant and he is about to surprise Hailey with a unexpected kiss, her head is turned away talking and when she turns back towards Seth her lips are already puckered up expecting the kiss.

The list of resolutions Ingrid first holds up to Paul is different from the one Paul reads the second time.

The chocolate that Laura spits out into the kitchen cloth disappears when she turns around to face Jensen. The cloth is shown neatly folded beside her instead with no signs of the chocolate.

When Laura is tossing eggs at the poster of Jensen, her chef coat is open, closed and then is open again.

Elise starts her appearance as backup singer for Jensen with black nail polish. In her rendition of Auld Lang Syne she is wearing white nail polish.

The placement of the striped kitchen cloth and the white bowl of chocolate changes after Laura turns around to face Jensen.

When in the elevator, Elise tries to convince Randy to have their own party. While he is sitting, he pushes up his left sleeve twice.

When Hailey runs away from home and Kim follows her to the subway, the crew and camera can be seen in the reflection of the subway train as it pulls away.

When Ingrid (Michelle Pfeiffer) and Paul (Zac Efron) are driving east on the 59th street bridge the Manhattan Skyline is incorrect. You would have to be driving west to see this view.

When Sam crashes his car into a snow drift, the airbags deploy individually, several seconds after impact, and they stay inflated. In an actual crash, they’d deploy instantly and simultaneously then deflate.

In the hospital, Tess is seen touching her stomach – it is obviously padded, as a normal pregnant stomach would not be that soft.