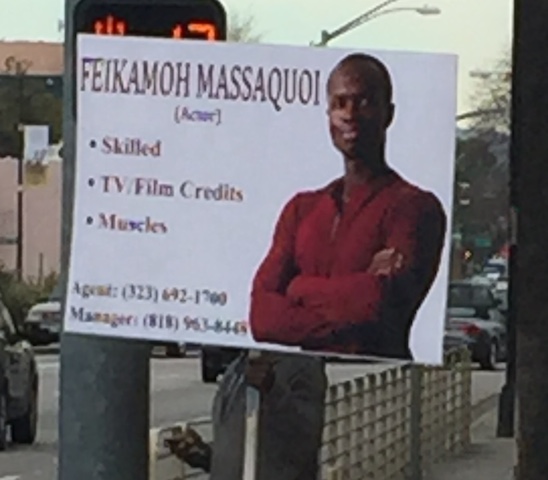 While some out of work actors spend their days in coffee shops or on Playstation, Feikamoh Massaquoi is literally hitting the streets. I see him in front the entrance of the Warner Brothers Studio lot. Many people pass him everyday. Writers, producers, actors, accountants, set designers and most importantly casting agents. While we’ve never heard of an actor picketing for a role.

After looking him up, I decided to say hi and see what his deal was. I didn’t have too much time, I had to punch in at the TV mill. Watch his clips, they are impressive. Which shocks me because he’s standing in front of studios with a sign. Remember Dennis Woodruff? (Look it up. It’s too late at night to be looking him up and linking him. Seriously!)

So why is a good actor standing on the street and not working? He has what most people dream of, an agent and manager. He has a good look and a sense of humor. One thing he doesn’t have is a sense a monologue. You got to have one ready. A producer in my office told me he has a Shakespearean and a regular monologue ready at a drop of a hat.

I guess in LA it’s like having breath mints or an AAA card – you never know when it will come in handy.

If you’re at SONY Studios next week and you see Feikamoh, give him a smile or better yet, a role.