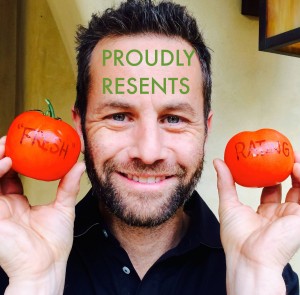 Recorded live at the Improv Lab in Hollywood, CA.The war on the war on Christmas continues! For Saving Christmas Kirk Cameron grabbed a camcorder and a bunch of college students and did their best to fill 80 minutes. It’s a variety show of sermons, backwards logic, mumbo jumbo and “comedy.”

Full disclosure, there were three people in the audience and four people on stage. I never planned on selling out the place, in fact, that was three more people than I expected to show up. There was my friend John Santry. He’s game for anything though.

I, Host Adam Spiegelman,  was standing outside the Improv comedy club with Jimmy Pardo waiting for Sharon Houston when two women in their late 20’s got out of an Uber. I thought, “Oh crap. I hope they aren’t coming to my show.” They were. They were day drinking and saw the live “Saving Christmas” online. I just felt pressure all of a sudden to perform for two drunks. But they were very nice and of course, we ended up talking to them.

Kirk is enjoying the annual Christmas party extravaganza thrown by his sister until he realizes he needs to help out Christian, his brother-in-law, who has a bad case of the bah-humbugs. Kirk’s fresh look at Christmas provides Christians the chance to see Christ is where He has always been: at the center of our Christmas celebrations and traditions.

What’s wrong with this movie? There’s not enough time or space to cover all of it, so I’ll just share the main reasons why anyone who loves Jesus, His Word and His people should or would never watch this mockery of Christmas.

“Saving Christmas” is in direct violation of Romans 14:5-6 and 22-23, twists Scripture, reconstructs history and encourages gluttony.

There’s nothing in this film that is “wholesome” and good for anyone, believer or non-believer.

Let’s save others from Kirk and crew’s version of Christ’s first coming and celebrate (if your conscience allows) with reverence, awestruck wonder and with the true and great joy that envelopes all who are humbled by and grateful for God’s most amazing Gift–Jesus Christ, the one and only Son of God.