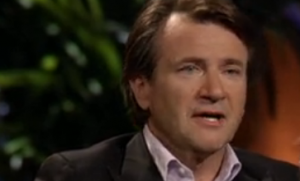 ABC’s “Shark Tank” exposed how the 1% really feels about hiring Americans.  The show proved that giving tax breaks to the rich will just keep the rich richer.

You see a  man came in with a product that people will want/need. It seems like a no brainer. BUT he will only make in the USA because he wants to help his small town that was devastated when the factories closed. He knows first hand what it does to a town when the jobs go over seas. he is stubborn about that. For that reason the sharks don’t see how they can make money and they are out. even the guy who’s dad was a factory worker. Robert cries when talking about his dad saying his proudest moment is working in a factory, but he still won’t invest in American jobs. It’s not about the people, it’s the profit. I’m not saying it, investors are saying it, openly, as fact.

What they are saying on TV is: WE WILL NOT INVEST IN AMERICA, WE CAN’T MAKE A PROFIT.
This is why work is going overseas, it’s cheaper. That’s all the “Job creators” care about. So the government gives them tax breaks and they take them to China or where ever. Jobs will leave this country as long as it’s profitable.
Watch.