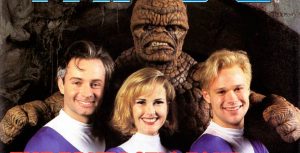 https://media.blubrry.com/proudlyresents/p/proudlyresents.com/media/prp161.mp3Podcast: Download | EmbedSubscribe: Android | Google Podcasts | RSSUPDATE: /Film just announced a new “Family friendly” version is in the works! The Fantastic 4 (1994) was hidden. Listen to the inside scoop on the infamous Roger Corman “Fantastic 4.” It was a movie no one was supposed to see. The prints were burned. Who leaked it? Why would a company want to make a movie just to shelve it? Chris Gore was the editor of “Film Threat” magazine. He did a cover story about the production – not knowing the…