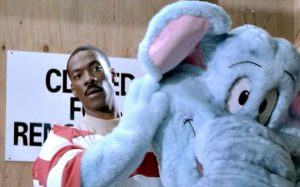 This is the third part of a three part #podcrawl! It started with “Hey, Do You Remember…?” reviewing “Beverly Hills Cop.” Then “Does it Have Legs?” took on “Beverly Hills Cop 2.” Now hear the conclusion – until there’s a BHC 4!

Check out other podcrawls with “Read it and Weep,” “The Flop House” and others.

Check out more great episodes with my brother Mike!

After supporting “Film Threat” – Check out Chris Gore’s appearance on this podcast!

Plot hole – According to IMDB

At least twice during the film, characters refer to the counterfeit paper as being “U.S. Mint quality”. However, the U.S. Mint (contrary to common misconception) does not print paper currency. It only mints coins. Paper money is made by the Bureau of Engraving and Printing. One of the characters who makes the error is the Secret Service Agent. Since the primary purpose of the Secret Service is to prevent counterfeiting, one would think a Secret Service Agent would be knowledgeable about where paper money is printed.