It’s 1977 and everyone wants to be a trucker. That was the craze. So someone figured to put some Karate and some so trucks together.

Basically Chuck Norrisan d his brother are truckers. gets trapped in a small corrupt town with an evil judge. Chuck Norris must save him from the folks.

The town is called “Texas City” and it’s in California near Malibu. I guess they call it “Texas City” because everyone is a stereotyped hillbilly. How did all these offensive stereotypes all make it to the same town?

Chuck Norris is a shaggy haired trucker who always does the right thing, sorta. After dropping off a load, he drives out to watch some dudes ride dirt bikes. One gets off his bike and they start hugging and touching each other. That’s to show that they are close brothers.

After his brother his kidnapped and after Chuck Norris beats up a bunch of guys dressed as hoodlums in a truck stop (when Chuck Norris busts out his high kicks, they are all out of frame) he’s off to save his brother. He stops long enough to have sex and fall in love with a local waitress. 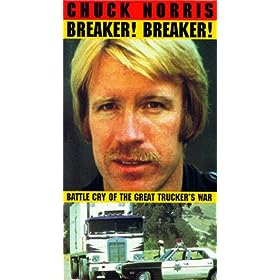 For some reason a convoy of trucks come to save the day like an 18 wheeler pose. They knock flats that represent the town. Maybe these people moved into the fake cowboy town from “Blazing Saddles.” Oh, the convoy is 4 trucks.

The film makes little sense and is lots of fun. It’s just over an hour, but feels like more.

Future famous people: Besides Chuck Norris, the movie’s film editor was Steve Zaillian who went on to write Schindler’s List and American Gangster, Gangs of New York and Clear and Present Danger.

Jack Nance who went onto Eraserhead the same year and lots of David Lynch Films to follow plays the crazy kook pal of Norris.

Here’s a scene in Dubbed in Spanish.

It might be worth buying so you don’t have to listen to these dudes.