Solarbabies was produced by Mel Brook’s film company. Comedian Christian Finnegan (“Best Week Ever”) joins us to talk about that classic 80’s post apocalyptic thriller… no not that one… the other one…no other other one…  “Solarbabies!”  Watch the movie here.

“Solarbabies” is film where orphans roller skate on sand and pray to a glowing bowling ball. (Well, when you put it that way, the movie sounds silly.) Lots of great actors got their start in “Solarbabies,” (James Legros, Luca Hass, Adrian Pasdar, Jamie Gertz, that guy from “Blow”  and a glowing bowling ball).  Also a couple of great actors finished there (A sleepwalking Charles Durning).

David Blaine – waitering secrets revealed. I talk about waiting tables in New Jersey with the future magician. He gave his secret for getting big tips…Lying.

Listen to the podcast to find out what famous comedian produced Solarbabies.

Christian also talks about the myth of the “token white guy” and some of the great people he got to work with on “Are We There Yet?” 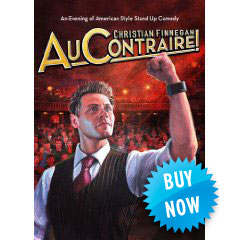 Mel Brooks did an interview for “How Did this Get Made” telling them how “Solarbabies” was made and how it almost ruined him.  /Film has a transcript on their website of the “Solarbabies” interview. Here’s part of that interview. You can read the whole thing here.

Mel Brooks: This wacky mashugana film in Spain that’s not really happening. So I go back [laughing] to Morgan and I say, “Give me another $10 million, and I’ll give you more interest of, you know.” And for some reason they listened to me, which was a mistake on all our parts. They gave me another $10 million. Okay. Now…so this $5 million movie is costing $23 million and it’s being shot in Spain. Anyway, they finished the movie—Alan finished it—and there was some storyline and there were a couple of good performances. And there was something like a movie [laughing], it was very close to being a movie. So they brought it back and I needed another $2 million to finish it, for special effects or something. I needed another $2 million and somehow, I don’t know where I got it, but I got it. And now I gotta pay Morgan Guaranty back a lot of money. I’m broke. This film…people are coming to my house and my wife is saying, “Who are these people in our kitchen?” I said, “No, I’m just getting a little more insurance.” But really I’m getting a second mortgage on the house. I had two cars, I put them up. I mean, I’m practically ready to jump off a roof, you know?

Mel Brooks: I mean a roof like the Empire State Building, I’m ready to go. Because I am legally broke and in debt for the first time in my life. Seriously in debt. I go to Alan Ladd. First of all, I stay up for 2-3 nights in a row without sleeping and I make a phony baloney trailer so it looks like Star Wars. It looks like the greatest thing—it looks like it’s going to be the greatest sci-fi picture ever made—a fairy tale in space. Irresistible! I make a 10-minute trailer. I take it to all the studios. I almost got Michael Eisner—where was he at the time? Paramount, and then went to Disney—and he said, “I’ll give you back the money.” He’s gonna give me back the $23 million, it’s gonna be his picture, you know? But [then-Paramount president of production Jeffrey] Katzenberg said “no.” So anyway, this movie is now, like, I hear the death knell. I hear a bell tolling late at night. I can’t sleep. Everything is mortgaged…I’m finished, I’m just finished.

Blake Harris: And what do you think about it creatively?