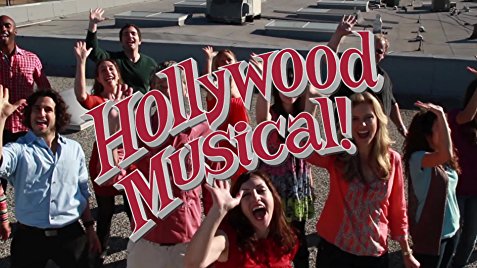 Before “LA LA Land” didn’t win the Oscar, there was another musical about making it in Hollywood that didn’t deserve any awards. “Hollywood Musical!” came out two, maybe ten years before “LA LA” landed in theaters. Today is a rare solo show. Ok, the only one. It’s my one time doing it alone. So listen on 1.5 speed. Or even 2X. It will sound fine.

This is also a rare show where I shit on a movie. It’s a dull, out of focus movie with a couple of sharp performances from Dee Ann Newkirk and Angela Pupello.

This was recorded way before “La La Land” came out.  But I put it on hold b/c I thought it was too mean and didn’t like that it was just me. So I’m putting it out now with little or no fanfare and just a core people listening to the show. I have another episode I was afraid to post. I might do that next. Plus, remastering old episodes that are no longer on itunes and/or need help with audio (AKA – sounded like shit)

Thanks to everyone who stayed with the show and thanks for your support.

I have never watched a movie this “lame” – well, not since about 1970. Actually, there were some good parts. Some of it was very funny – especially the first few minutes. And there was some good acting.

It was a great story, but the directing, the production – technically good – but the story – it’s a great story, but it’s the script I think – the good story never came across in as a dramatic way as it could have. The lamest part? The songs they sang at these weird moments – and the songs were lame. They sounded like Broadway singers – in a movie! And the lyrics and the songs – they really slowed things down. The songs did not make sense. I skipped over most of the songs. I feel bad because the story had potential. It just didn’t get told.

I really enjoyed the story and watching the characters develop. The actors and actresses weren’t the perfect beauty types which made the story even more real to me. One of my favorite songs is in the middle of the movie Something Has To Give, it brings in all the main characters. I also liked that the ending was about hope, which was discussed before. Not everyone had a perfectly happy ending, and it’s still up in the air if any of them actually will become a star, but they still keep the hope and keep trying.

The four stars is because in some parts did get a little bit on a slow side, but overall a pretty good musical.

I really enjoyed it. Some of the lyrics were a little cheesy. Overall, I think it was very well thought out and put together. A lot of care and love went into this project and the subject matter is really important. So many people are slugging it out to work in the theater and movies etc.

If you have any connection to the artistic world, please watch this movie.

1.0 out of 5 starsHard to watch
By🙂on September 6, 2015
So not what I was expecting, it seems really low budget. I did not watch the whole thing, I could not get through 20min

2.0 out of 5 stars A low budget musical about Hollywide life
ByPatrickon February 16, 2016

An amusing musical comment on Hollywood life that never really rises above its obviously low budget. If your a die hard fan of musicals it may appeal.

It was ok? but the lyrics were really cheesy, the directing & shots were pseudo-amateur… the entire movie was just kinda the physical manifestation of “….eh”.

ByWiggyon October 20, 2016
Could of been more exciting