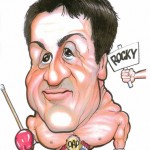 APM’s Rico Gagliano & NPR’s Adam Felber join us to discuss the movie “Rocky IV.” The movie was the height of the cold war craziness that swept our country in the 80’s. Did Stalone begin the jingoism with “Rambo 2” and continue it  the fourth Rocky?

Felber tells us what ‘s like to be in a bubble on Bill Maher. Gagliano gives us the behind the scenes of his new radio show “The Dinner Party.” We find out Dolph Lundgren’s dirty litter secret (He’s smart). Also host Adam Spiegelman reveals his very strange teenage crush.

Listen to the show on the website or go to Stitcher or iTunes.

Here’s Rocky’s inane speech at the end of the movie.

Writer/director Paul Sullivan, NPR’s Adam Felber (“Wait, Wait Don’t Tell Me”) & I recap “Quigley.” You know the movie where Gary Busey plays a mean computer game business type guy who is turned into a dog. As a dog, Gary  learns about life, flimsy sets, terrible special effect, non-comedic timing and how to sleep through a role. “Quigley”  also features Booger, Patrick from “SpongeBob,” Christopher Atkins, the black guy from “Dream On” (he’s also the guy from “The Parkers”).  Anthony Perkins’ son plays it straight as a fallen angel. The movie has everything: bad sets, bad lines and even a crew member walking in front of a camera. To be fair, it could just be a pushy extra who likes to wear vests and carry lights. All these elements make a very fun film.

Sullivan talks about directing his low-budget comedy “I’ll Believe You,” and how he almost got comedian Chris Elliott eaten by an alligator.

Here are some choice clips of “Quigley.” It’s from the “Found Footage Festival.” I don’t know what’s “found” about it. Did they “find” it in a bargain bin? Anyway, thanks for editing this for me to “borrow.” I have just started the “Borrowed Clip Fest.”