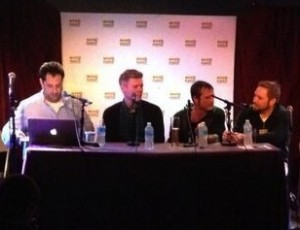 First Asta and Catherine talked about their new “Nuke’em High” movie that opens at the Laemmle Noho this weekend. 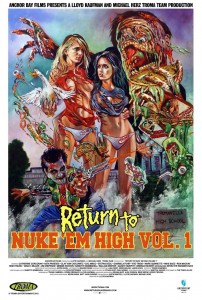 Let’s all go to the Friday Midnight showing! This was a fun show to do. I got to meet a couple of actual listeners. The scene was fun. Downstairs at a bar on the edge of China Town.

A 4 PM show brought in an ok crowd. I mean the people were great, the numbers were ok. “Better than last year,” I was told. Back to the live show, Christian was very funny as usual. The show came together as Lloyd 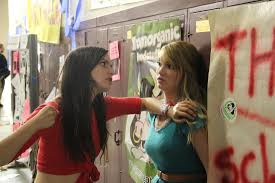 Kaufman (Next week we’re airing a one-on-one interview!) canceled the live show. So he sent over the stars of his movie. Robert is a friend so I thought we’d make it a Troma Tribute. Ben Lerman@benlerman learned the original “Nuke’em High” theme song and then wrote one of his own. Check out this fun and unique episode. Tell me what you think. Next week, Lloyd Kaufman.

Sean Conroy Monkeys w/ “Dawn Of the Planet of the Apes”

https://media.blubrry.com/proudlyresents/p/proudlyresents.com/media/prp159.mp3Podcast: Download | EmbedSubscribe: Android | Google Podcasts | RSSSean Conroy (“The Long Shot Podcast,” writer “Mr. Pickles”) and I talk about the #1 movie of the weekend, “Dawn of the Planet of the Apes.” It’s filled with spoilers and mispronunciation. Listen to me call “apes,” “monkeys.” We talk about the incredible CGI, the interesting […]

https://media.blubrry.com/proudlyresents/p/proudlyresents.com/media/prp155.mp3Podcast: Download | EmbedSubscribe: Android | Google Podcasts | RSSOk, technically “Blood Lake: Attack of the Killer Lampreys”  is not a shark movie…But it’s made by the Sharknado people. And it’s a cool interview with Fred Stoller – You know this guy from the show… he’s that guy. Fred Stoller has been cast as the comic relief on sitcoms and […]