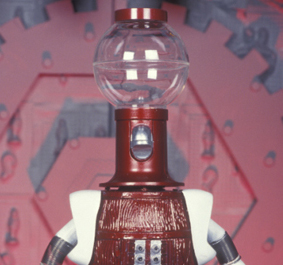 MST3k’s” Kevin Murphy talks about the history of “Tom Servo,” the show, RiffTrax and why “Manos” is his favorite/least favorite movie ever. Ever.

For eleven years Murphy was a writer for MST3K; for nine of those years, he also voiced and operated the robot Tom Servo, replacing original cast member J. Elvis Weinstein. After taking over the role of Servo, an anonymous person sent him a 6-foot-long (1.8 m) banner that read “I HATE TOM SERVO’S NEW VOICE.” Flattered by the enormous amount of effort taken to heckle him, Murphy hung the banner in his office for over a year. During the final three years of the series, he additionally portrayed Professor Bobo, an English-speaking mountain gorilla in the style of Planet of the Apes.

After the end of MST3K, Murphy spent the year 2001 going to a different movie every day and wrote a book about this experience, entitled A Year at the Movies: One Man’s Filmgoing Odyssey. During his year at the movies, Murphy samples theatres from small-town boxes to urban megaplexes, attempts (and rejects) a theatre-food diet, suffers a kidney stone, visits both the Sundance and Cannes film festivals, sneaks Thanksgiving dinner into a showing of Monsters, Inc., and records all of these experiences, both good and bad. His feat – viewing over four hundred films on four continents – was mentioned in Ripley’s Believe It or Not.

This is Proudly Resents, proudlyresents.com. I’m Adam Spiegelman and

If you listen to this show, then you probably watched

Where he would say smart ass things to stupid ass movies.now joins some of the gang for the very funny Rifftrax. He also wrote A Year at the Movies: One Man’s Film going Odyssey

They are doing a very cool live showing showing of Birdemic on Oct. 25th.  To tell us more is Kevin Murphy.   How are you Kevin?

Tell us about rifftrax and the live show

What is the process to writing a rifftrax?

Why did you pick birdemic?

Favorite joke on the show?

Why do you think the show lasted so long?

Did you ever feel you were getting too snarky with the movies, or was it all in the name of fun? *

How quickly did you get sick of the MST3000 song?

Don McCoy I enjoyed his “A Year At the Movies” Are working on a new book?

Art Wheeler Kevin,  would you come over to my house and watch Manos with me.