Skip to content
Adam Felber ("Live from the Poundstone Institute"), writer Paul Sullivan and a guy in a tight Tron suit get it Tron! 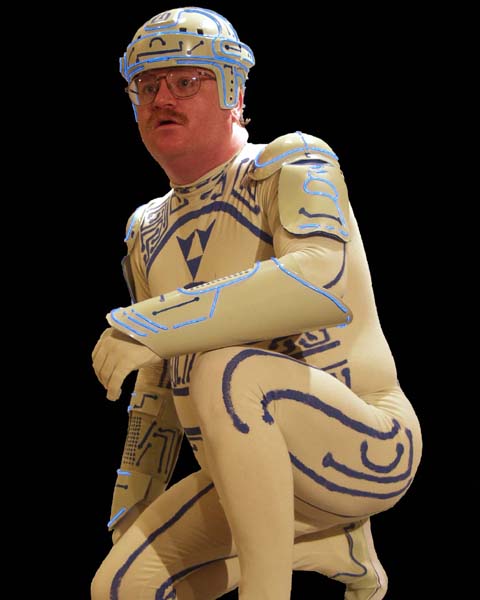 “Tron Guy,” Jay Maynard, joins us to review “Tron: Legacy.” A grown man dresses like the 80’s video game star “Tron” and becomes one a viral star. What does he think of sequel? Does it live up to the spandex?

Adam Felber (NPR’s “Live from the Poundstone Institute”), Paul Sullivan (“Sully Baseball” podcast) and Eric “Danger” Nienhaus join us to interview the internet meme “Tron Guy” and discuss this shambles of a sequel to Tron. Adam Spiegelman (this podcast) hosts.

Who is the Tron Guy? He was a guy in 2004 who made his own Tron costume and wore it online. It hit all the pre social media sites. He became an internet phenom! I was working at “Jimmy Kimmel LIve!” at the time. booking human interest guests. When I saw the photo of him, I knew he was gold. I pitched him and they immediately wanted him and his skin tight suit on the air. The Tron Guy was so funny and sincere that they had him on a lot. The writers didn’t know quite what to do with him. They sent him to red carpet events and then on dates. Jay was always so nice and funny. It was great to talk to him again and hear what he thought of the Tron sequel.

Oddly enough, when Jay Maynard was appearing on the show, the original Tron was re-released and showed at the movie theater next to our studio.

Here’s more about Jay Maynard, The Tron Guy From Wikipedia:

Maynard created a revealing electroluminescent costume, inspired by the film Tron, that he could wear at the science fiction convention Penguicon in 2004. He has said that he “hasn’t missed a Penguicon, and doesn’t intend to”.  He created a web page of photos of the costume, and of himself wearing it. His page of photos quickly gained a lot of attention on the Internet, after it was posted on Slashdot and Fark.

He was invited for a series of appearances on the late-night talk show Jimmy Kimmel Live! in 2004.

In 2006, Maynard appeared in a music video entitled “We Are the Web”, for the website of the same name. The video advocates the concept of network neutrality.  In it, Maynard appears alongside several other Internet celebrities, including Leslie Hall and Randy Constan. He was also parodied in the 2008 South Park episode “Canada on Strike“. His likeness appeared alongside those of such other Internet celebrities as Gary Brolsma, Star Wars Kid, Chris Crocker, and Tay Zonday.

In 2009, Maynard was the focus of the “Web Redemption” segment on an episode of the TV series Tosh.0; in this segment, an Internet celebrity answers both serious and mocking questions from host Daniel Tosh, then re-enacts their original act.

In 2010, Maynard was banned from seeing the film Tron: Legacy in his iconic Tron suit in his local movie theater because of the illuminating lights on his suit.

On June 8, 2011, Maynard appeared on America’s Got Talent. He received a “no” vote from all of the three judges and did not make it past the audition round. Howie Mandel had him restart his introductory speech over several times, so it was left unclear what his act was going to be.

In 2011, Maynard appeared in Duck Products‘ “Stuck On Duck Video Project”,  a commercial for duct tape. The ad, made by Ryactive and produced by Tongal, recreates the light-cycle race from Tron using stop-motion animation, followed by Jay Maynard’s appearance in the Tron Guy outfit.[9] The video was featured in Wired Magazine as a “genius idea”  and like many of Maynard’s previous videos went viral, becoming the tenth most viewed video of all time on Vimeo.

On August 26, 2015, Maynard was interviewed by the Scene World Podcast in a live video podcast, hosted by Olympronica for the Film & Games Interactions exhibit at the Deutsches Filminstitut in Frankfurt, Germany. The interview was presented live on Twitch.tv, and later published as both a video interview on YouTube and audio podcast.