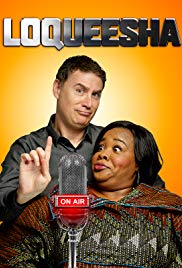 We take apart the film, hear from defenders and are just confused. Enjoy the podcast!

Here are quotes from an article in Newsweek Magazine…

“When people watch the entire film, they will see that there is much more here than meets the eye,” he said. “Virtually all the comments I’ve seen online are addressed directly in the film from a variety of perspectives.” Saville did not elaborate on those comments or perspectives.

Saville defends his performance in Loqueesha by citing a 2015 SNL skit featuring Louis C.K. talking in a black woman’s voice to avoid being seen as a racist by his coworkers and boss. “(The sketch) has him performing a similar character. It was met with laughter and applause,” Saville said.

“I’m excited that so many people are aware of the film, for whatever reasons,” Saville told Newsweek. “As an independent filmmaker, you always want your work to be seen by the largest audience possible.” He claims that the name “Loqueesha” was created on the spot and “just came to him.”