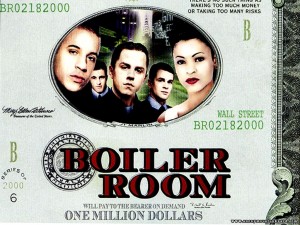 Boiler Room, the Vin Deisel/Ben Affleck sausage fest, is proudly resented by Shawn Marek (Sideshow Network hot shot). We talk about the movie, lots of nerd stuff, the best Batman show on TV and Shawn and I compare telemarketing stories.

I can’t remember the book where I read the interview with the director of this movie. I know I told you to come to the show notes for them. I ain’t got it. So sue me. (Please don’t, it will be a huge waste of both our times.)

Here’s some more about the movie from Wiki –

Boiler Room is based on interviews the writer conducted with numerous brokers over a two-year period, and is inspired by the firm Stratton Oakmont and the life of Jordan Belfort, whose autobiography was later adapted into Martin Scorsese‘s 2013 film The Wolf of Wall Street, starring Leonardo DiCaprio as Belfort.

Boiler Room received generally positive reviews. Review aggregation website Rotten Tomatoes gives the film a score of 67% based on reviews from 98 critics; the site’s consensus is: “Its ending is disappointingly tidy, butBoiler Roomboasts just enough sharp writing and brisk pacing to make getting there worthwhile.”

Seth Davis is a college dropout running an illegal casino from his rented apartment. Driven by his domineering fathers disapproval at his illegitimate existence and his desire for serious wealth, Seth suddenly finds himself seduced by the opportunity to interview as a trainee stock broker from recent acquaintance Greg (Nicky Katt). Walking into the offices of JT Marlin, a small time brokerage firm on the outskirts of New York – Seth gets an aggressive cameo performance from Jay (Ben Affleck) that sets the tone for a firm clearly placing money above all else. Seth’s fractured relationship with his father and flirtatious glances from love interest Abbie (Nia Long) are enough to keep Seth motivated in his new found career. As he begins to excel and develop a love for the hard sale and high commission, a few chance encounters leads Seth to question the legitimacy of the firms operations – placing him once again at odds with his father and what remains of his morality. With homages to Wall… Written by mikal