Find out some of the shooting secrets to some of the great scenes. Why was Matt wearing a woman’s wig in parts of the film? Was Matt dead? And for how long?

Matt opens up about his two real life felony convictions. Between shooting “Samurai Cop” and the eventual sequel Matt went to prison twice. He’s open up to what happened.

Listen to our review of the film from back in the day!

What’s with the dialogue? And why did Matt break my dining room chair? Don’t lean back on a wooden chair, dude!

Matt also talks about being Sylvester Stallone’s body guard, and opens up about his life of crime. 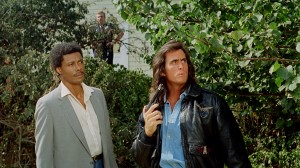 Give to the Kickstarter for “Samurai Cop 2!”

Thanks to Greg and Cinema Epoch.

Matt talks about being jealous of Sylvester Stallone. Mat was Stallone’s body-guard, but he dreamed of being the star. He finally got the chance.

No one ever thought this film would see the light of day.. and it almost didn’t. Matt tells us the unusual story of the movie’s discovery.

Former bodyguard to Sylvester Stallone.
Ran a video store straight out of high school for three years.
Once worked in loss prevention for Sears in which he would watch the CCTV screens for shoplifters.
Imagined that he’d become the next John Candy instead of becoming an action star.
Also does stand-up comedy.
Father of Courtney Karedas.

Transcript of the famous nurse scene:

Joe Marshall, (the samurai cop): I love what I see.

Nurse: Would you like to touch what you see?

Joe Marshall: Yes. Yes I would.

Nurse: Would you like to go out with me?

Joe Marshall: Uh, yes I would.

Nurse: Well then let’s see what you’ve got…

Nurse: Doesn’t interest me. Nothing there.

Joe Marshall: Nothing there? Just exactly what would interest you, something the size of a jumbo jet?

Nurse: Have you been circumcised?

Joe Marshall, the samurai cop: Yeah I have, why?

Nurse: Your doctor must have cut a large portion off.

Joe Marshall: No uh, he was a, he was a good doctor.

Nurse: Good doctors make mistakes too, that’s why they have insurance.

Joe Marshall: [getting closer to her] Hey… don’t worry. I got enough. It’s big.